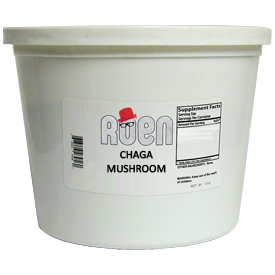 Chaga is a very important medicinal mushroom, maybe even more important than Reishi. It also has the name "mushroom of immorality" because it is known to extend lifespan.

Cultures which are known to drink the tea made from the mushroom also are known to have longer lifespans. As we have looked to science to understand the reason, there are few possible contributing factors that have been discovered.

The first is that chaga was found to increase the production of Superoxide Dismutase (SOD), which is a super antioxidant. Chaga also works in some ways similar to Reishi, since both contains beta-glucan. This means they both support the immune system in very powerful ways.

Chaga also contains Betulinic Acid, which helps the body with cholesterol. As we age cholesterol levels decline and this is a major cause of aging. So this aspect of Chaga does perfectly explain why it would add several years to a lifespan.

Roen's chaga is wildcrafted. This is because chaga is not like most mushrooms. It grows naturally on the side of birch trees as part of a parasitic relationship. The mushroom is very hard, almost like a wood but clearly distinct from the wood of the birch tree. The pieces are cooked in a tea.